Calf deaths in a dairy herd

Diseases in dairy calves are commonly diarrhoea in the first month of life and Enzootic Calf Pneumonia, but features of this disease outbreak were: 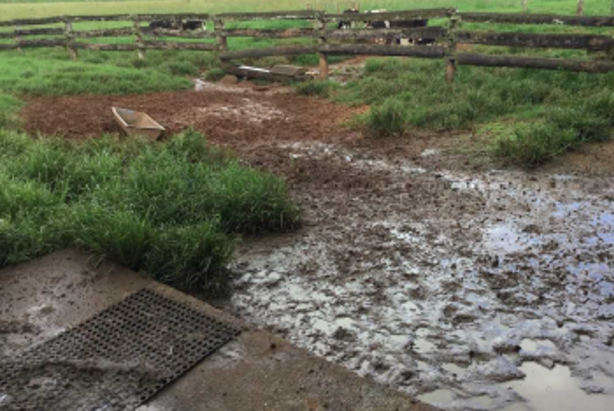 Above: Avoid using paddocks that receive effluent from the calf rearing facility

Time and location:  In March and April 2018 on the Atherton Tableland.

Case definition: Eighteen calves between 2 weeks and 6 months of age died in a 300-cow dairy herd that rears 200 calves annually. Healthy calves became lethargic, depressed and died within 2 -3 days. Most calves had already been weaned off milk and were grazing tropical pasture while being supplemented with a grain/ protein concentrate. Some calves showed nervous signs of recumbency, dog paddling and opisthotonus; others became depressed, lethargic and febrile.

Laboratory findings: Salmonella dublin was cultured from various tissues in two of the calves but not from the faeces from live calves. Positive cultures came from the jejunum, mesenteric lymph nodes, liver, lungs and spleen.

Animal / management / environment risk factors: A comprehensive calf rearing audit was conducted. Many aspects of management were investigated. Appropriate colostrum management was confirmed by a serum protein survey showing that 92% of calves had received transfer of passive immunity. Nutritional management was appropriate. Some shortcomings in stocking density, feeding hygiene and effluent management were observed.