Unexplained deaths of 10 weaner cattle from a mob of 70 over 4-6 weeks. 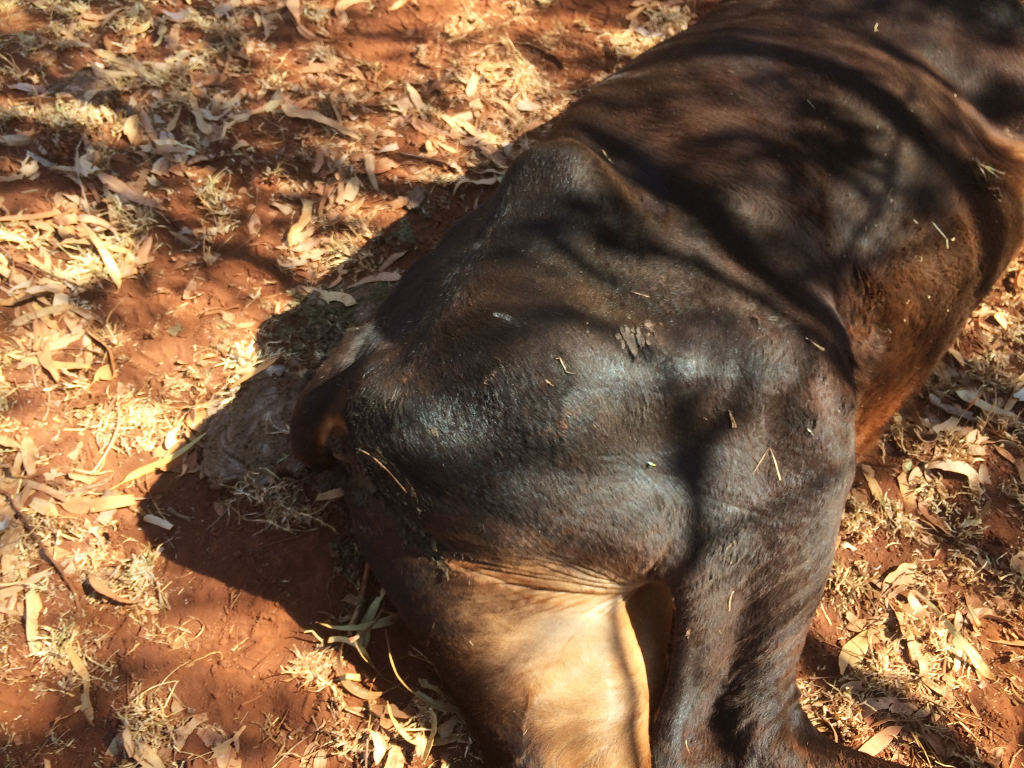 Gross post mortem findings:  Two post mortems were conducted five days apart. The first was by the producer (using one of the producer kits!) and the second under the supervision of a field veterinary officer and local practitioner.

The producer noted a prominent gall bladder, soft kidneys full of fluid, and a large amount of black watery contents in the rumen. He sent fixed sections of lung, liver, heart, kidney and reticulum to the laboratory. At the second post mortem they found a large amount of fluid and some grass/hay in the rumen, an empty large intestine and rectum, yellow-tinged omentum, pale lungs and kidneys, a friable liver and urine the colour of water.

Fresh and fixed lung, liver, heart, kidney, rumen, intestine and brain samples were sent, as well as blood, urine, rumen contents, vitreous and samples of an unusual green plant that the owner had seen the cattle eating.

Laboratory findings:  Both animals had nephrosis and histopathological changes in the liver:

The oxalate crystals seen in the second animal could be responsible for the nephrotoxicity OR secondary to kidney damage.

The plant sample was identified as Clerodendrum tomentosum, a shrub/small tree that occurs in areas across the north and is also commonly known as the hairy lolly bush or downy chance (to name a few). An oxalate assay on the plant sample revealed very low levels of oxalate and is thought unlikely to cause oxalate nephrosis. However the plant had been associated with cattle deaths previously but the toxin unidentified (Ross McKenzie).

Animal / management / environment risk factors: Both animals were part of a mob of 12-month old weaners who had not been in this paddock before. The paddock had been previously used for adult cattle only.

Recommendations to the producer:  As both of the autopsied animals had kidney damage most likely caused by plant poisoning, the owners were advised to search the paddock for unusual plants. The pathologists listed a number of common plants that have been known to cause nephrotoxicity (such as Lesser Loosestrife, scarlet pimpernel, lamb poison and a couple of types of amaranth).

Obtaining a definitive diagnosis of plant poisoning can be challenging

The key bases to cover for diagnosis are: