Time and location: June to July 2018, as per the timeline. The vet, who was overseas when the manager rang, collaborated with two other vets (government and export) to collect data and samples. Although the timeline spans several weeks, a definitive diagnosis was reached within a few days of the manager seeking help.

Gross post mortem findings:  The manager sent the vet a short video of an affected bull. This was helpful as it  showed an animal in its terminal stages (not affected by flaccid or rigid paralysis, no bloody discharges etc).

The vets assisting this investigation did post mortems on 3 dead animals from the first two consignments. Findings were inconclusive as autolysis had already started, although swelling and some dark areas in the muscles raised the possibility of clostridial diseases.

Drawing of the timeline was key to this case, guiding the thinking and next steps. The differential list included: tick fever (a 2-week incubation with losses after trucking being consistent with naïve animals moving into a tick zone); clostridial disease; botulism from pre-formed toxin in feed; and a poisoning like ironwood.

A fresh post mortem was needed to confirm (or rule out) the cause. This was done four days after the initial inquiry on a very sick bull from the third consignment. Gross pathology included port wine coloured urine, an enlarged gall bladder and petechial haemorrhages on numerous mucosal surfaces (see photos). Tick fever was looking likely although spleen involvement and jaundice was not as evident as expected.

Recommendations to the producer: Normally cattle being transferred to more northern properties are vaccinated with 3 germ (allowing sufficient time for protection to develop). Options in this case: 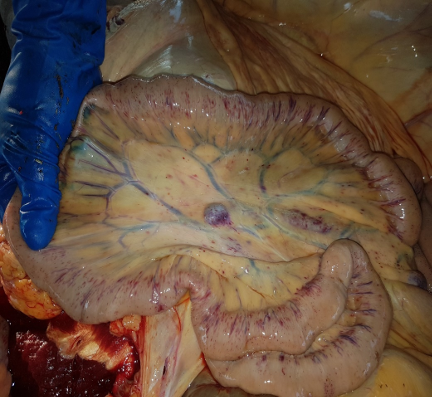 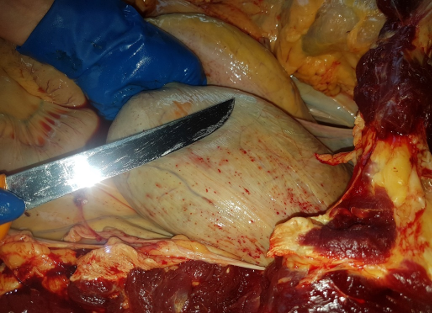 The tick fever diagnosis was confirmed by a brain smear. The above image shows red blood cells in a capillary, with many containing pear-shaped, often paired, basophilic organisms consistent in size and shape with Babesia bovis.

Reflections of the vet:
Back to SDIs