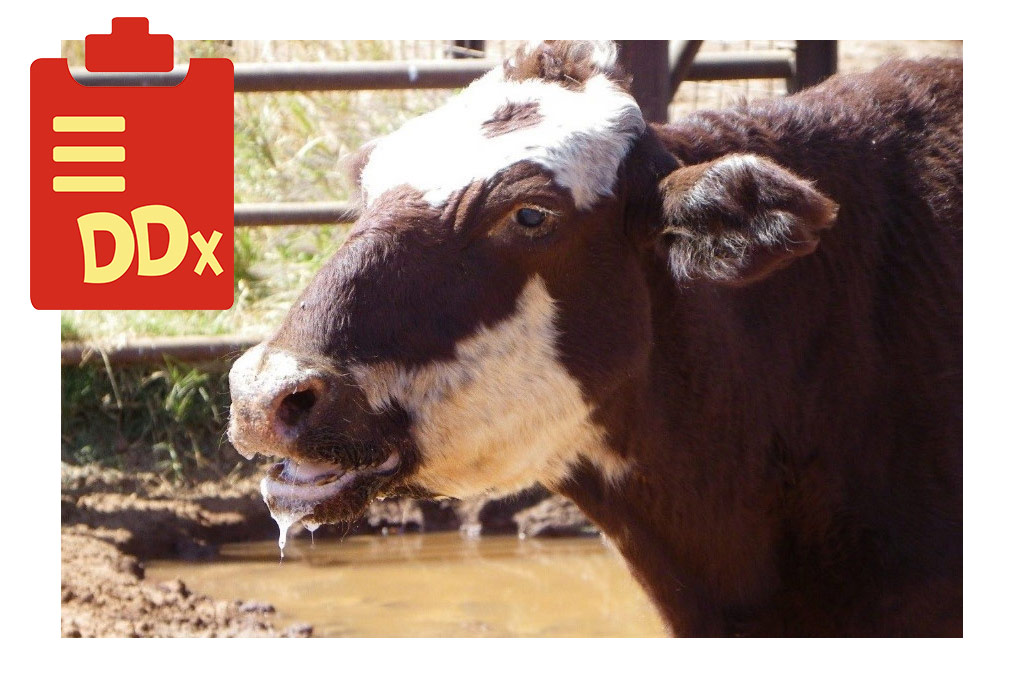 Mouth breathing in a case of Bovine Respiratory Disease

Gross post mortem findings: One very sick heifer with a temperature of 41oC was euthanased. The main autopsy findings were swelling and inflammation of the retropharyngeal lymph nodes, inflammation of the nasal and pharyngeal membranes, froth in the trachea, and consolidation and oedma of the lower lung lobes. A field diagnosis of Pasteurella multocida pneumonia was made. Fixed and fresh samples including swabs of the lung and eye lesions were sent to the lab, along with an EDTA blood and smear. A treatment regime was started.

Animal / management / environment risk factors: Pasteurella multocida live in the upper respiratory tract of normal cattle and are kept in check by the body’s defences.  The bacteria can invade lung tissue when animals are stressed, and are easily spread by nasal discharges from infected cattle in crowded or confined conditions. The dusty conditions and high stocking rate will have contributed to the rampant growth of this bacteria and subsequent deaths.

Recommendations to the producer: Treat affected cattle with Vitamin A,D&E injection  AND Anti-inflammatory (flunixin or tolfenamic acid)  AND a course of antibiotics (oxytet or trimethoprim/sulfadoxine).

To prevent further cases: reduce the stocking density to less than 1 beast per 10 square metres; suppress DUST with sprinklers; and give Vitamin A,D&E injection + Dectomax injection. The Mannheimia haemolytica (Bovilis) vaccine is not indicated in this case.