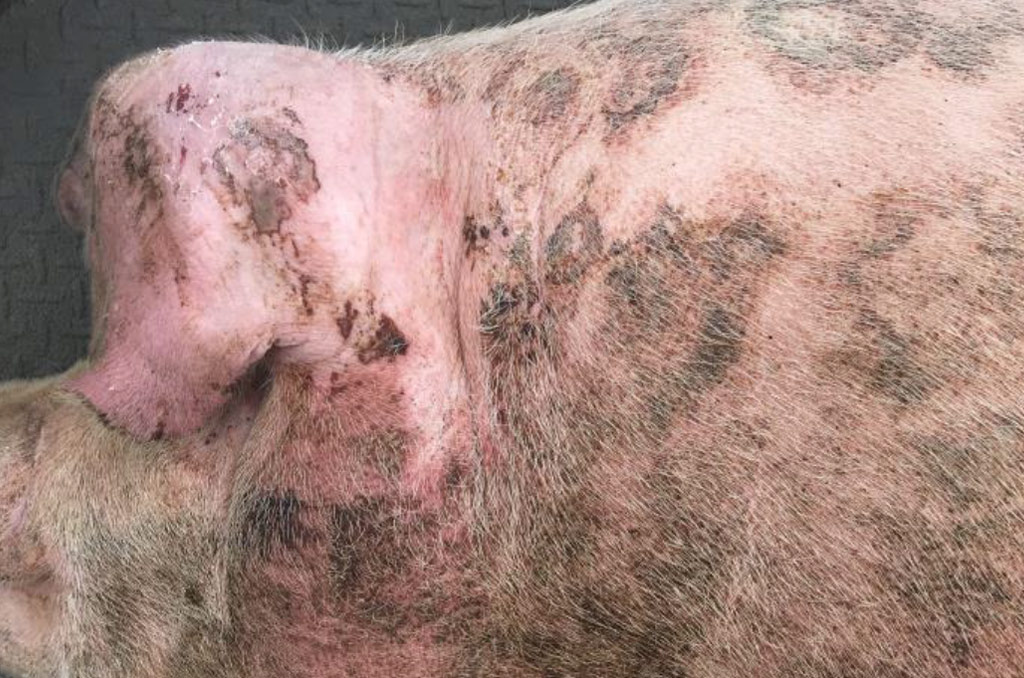 Case definition: Sows stop eating, lose body condition, some die within a day or two, others take a week or more. The case definition is deliberately broad due to the range of clinical signs and post mortem findings.

Disease mapping: Prior to 2017 it had been rare to lose any pigs although there had been some losses in 2017. Six of 15 gilts introduced in Jun-2018 were affected. The gilts had been split across two pens and 5 of 7 gilts in one pen became ill in September with diamond-shaped skin lesions. They seemed to recover but then 2 aborted and 3 subsequently died. One other introduced gilt from the second pen became ill in Jan-2019. A moribund sow with a high temperature, swollen legs, ears and face, and severe skin blotching was euthanised and autopsied in mid November. She had farrowed 3 weeks earlier with 8 stillborn piglets and 3 live born. Two sows that had been sent for premature slaughter in the following fortnight were found to have a large (2L) liver abscess and an abdominal abscess respectively at meat inspection. Twelve sows were affected between Sep-2018 and Jan-2019. Seven of the 12 cases (58%) died.

Gross findings: Clinical signs varied from inappetence and death within 12 hours, to abortion or stillbirths, to skin blotching, to wasting.

Laboratory findings: No abnormalities were seen in the brain, lung, spleen, stomach and intestine of the autopsied sow. Histopathology showed an interstitial nephritis (of uncertain significance) and skin pathology suggestive of a systemic sepsis.  A pure growth of non-haemolytic E coli was cultured from the liver abscess.

Animal / management / environment risk factors: The practice organised for a pig specialist to attend the farm. He believes that several conditions were operating at one time: wasting due to chronic internal abscessation (based on the two slaughter sows); an Erysipelas outbreak in the introduced gilts (given the diamond-shaped skin lesions in the gilts, severity of clinical signs in the autopsied sow, and no other gross pathology); and inappetence followed by constipation, gastric ulceration, anaemia and death. The introduction of gilts from a high health status herd to one of a lower health status without quarantine was noted as a risky practice (despite having done this for 10 years).

Possible reasons for Erysipelas vaccine breakdown were: gilts assumed to have been previously vaccinated and therefore only given one dose on arrival; a vaccine container of 125 doses used over many months due to the small number of sows vaccinated at any one time; or issues with vaccine storage, eg if the fridge temperature was 7oC or above at any time.