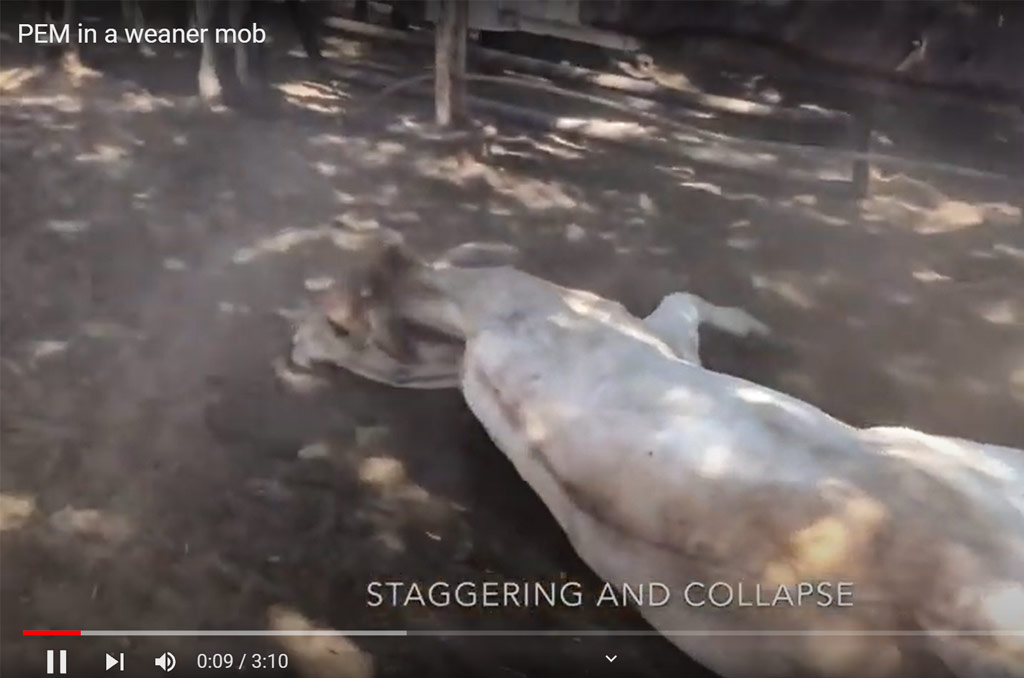 Gross findings: Two affected animals were euthanised for necropsy. No significant gross post mortem findings were seen in either.

Laboratory findings: Mild to moderate degeneration and oedema of cerebral grey matter consistent with PEM. No changes were seen in white matter in the brain or to the lumbar spinal cord in either animal. Aqueous humor tests for urea were negative. Blood lead testing was not undertaken but haematology did not show any abnormalities and the animals did not have any suspicious history of access to a lead source. Rabies, ABLV and Aujesky’s disease were ruled-out by antigen and molecular diagnostic testing.

Animal / management / environment risk factors: All affected animals were in good condition and typically the heavier individuals in the mob. The weaners had been mustered from an area with a small amount of dry feed to clean, weed-free holding yards where they had been separated from their dams. They were given freshly cut, green Rhodes grass hay and water. It’s possible the sudden change in feed, from low quality dry pasture to good quality hay, could precipitate PEM (associated with thiaminase-producing bacteria in the rumen).

Recommendations to the producer: Temporarily remove the weaners from the hay and then introduce them to reduced quantities over the next few days.  (Five days later no further cases had occurred and the mildly affected animals were returning to normal without treatment.) If the same conditions were to occur again, the effects of a sudden feed quality and quantity change could be mitigated with the use of injectable Vitamin B complex for a few days after weaning. This may be a cost-prohibitive option when dealing with large mobs. Alternatively close observation of the mob and injecting affected animals with thiamine early in the disease course may lead to a remission of clinical signs within 6-24 hours.