Septicaemia with multi-organ vasculitis and thrombosis

Unusual presentation: Sixteen deaths in a mob of young bulls within a month of arriving on a new property. 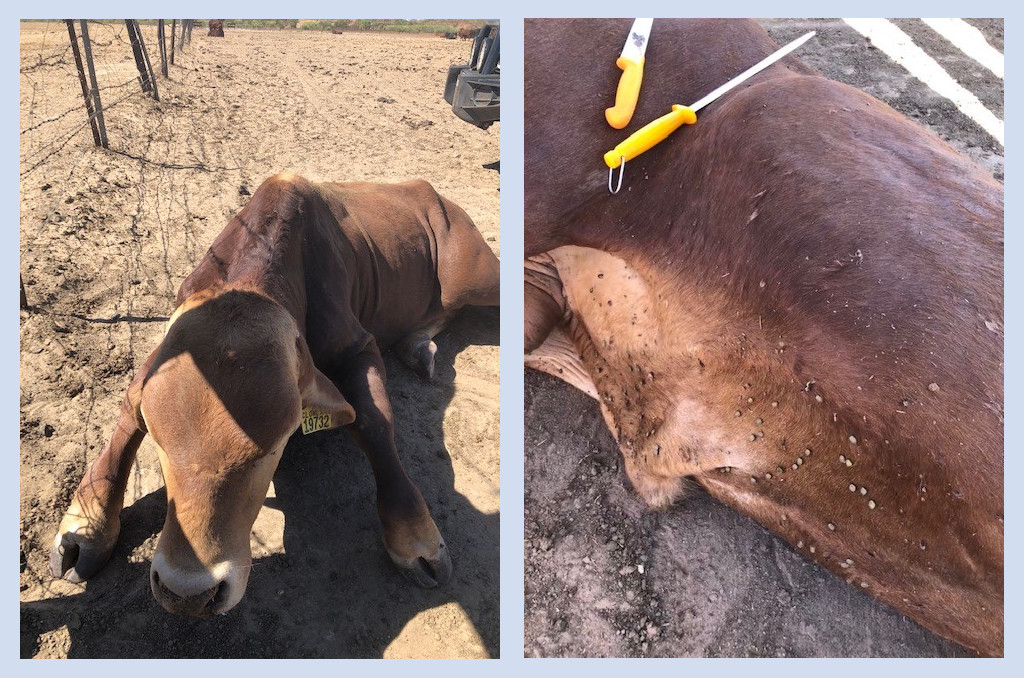 Above: A depressed, non-responsive bull  – with ticks but no signs of ocular or nasal discharge.

Case definition: Two-year-old bulls with sunken eyes, moving slowly with a tucked-up gait, that deteriorate in condition and die. All cases have a high rectal temperature, some have an ocular and nasal discharge.

Disease mapping: 122 two-year-old bulls were sourced from two properties: Brangus from a NSW property and Droughtmaster from a southern Queensland property. The Brangus had been vaccinated for Tick Fever two months before arriving in the north. On arrival all were vaccinated for botulism and vibrio, treated with Dectomax, and fed hay in the yards for two days. The mortalities started about 3 weeks after arrival with sixteen dead by the end of the fourth week. No details were available on the attack rate by property of origin.

Gross findings: Post mortem samples were submitted from two bulls. The first set was taken by the station manager under instruction from the vet (using a PM kit on site). The second post mortem was done by the vet and was largely unremarkable. All major organs appeared normal, the liver was slightly enlarged and there was some congestion in one lung lobe. A full range of samples were submitted to the lab including bloods (all tubes), blood smear, liver, kidney, spleen, heart, lung, duodenum, abomasal contents, urine and brain.

Laboratory findings: There was no evidence of blood parasites such as Babesia or Anaplasmosis. There was no evidence of BEF in the blood samples and spleen. There was no evidence of BHV1 (a cause of IBR) in either bull. The diagnosis was ultimately made on the widespread damage visible at the cellular level – extensive vasculitis and thrombosis affecting primarily the lung of one animal and multiple organs, particularly the meninges, in the second. This septicaemic, toxaemic process was consistent with Histophilus somni, a bacteria from the Pasteurellaceae family.

Animal / management / environment risk factors:  The primary trigger for a BRD outbreak in imported cattle is stress. In this case the bulls came on a long road trip, from milder climatic conditions and better pastures, and had experienced a very marked and sudden change in temperature and humidity about 2 weeks after their arrival. A similar line of bulls had come from the south last year without a major mortality event. Management commented that they had access to hay for longer last year and the tougher nutritional conditions in the south last year may have conditioned the bulls for the north.

Recommendations:  It was recommended that in future bulls be brought up about a month earlier to provide a longer period of milder weather to help soften the transition along with access to better nutrition. The existing vaccination protocol for Tick fever and Bovine Ephemeral Fever (3 Day) should be maintained.

It would also be worth considering prior vaccination with one or more of the BRD vaccines (Bovillis MH-IBR or Rhinoguard and Bov-sheild-MH One) as most BRD outbreaks involve multiple agents. Pestigard was another consideration, especially for bulls drawn from multiple sources. An allowance of 2-4 weeks would need to be made after the last dose to give the vaccines time to work. 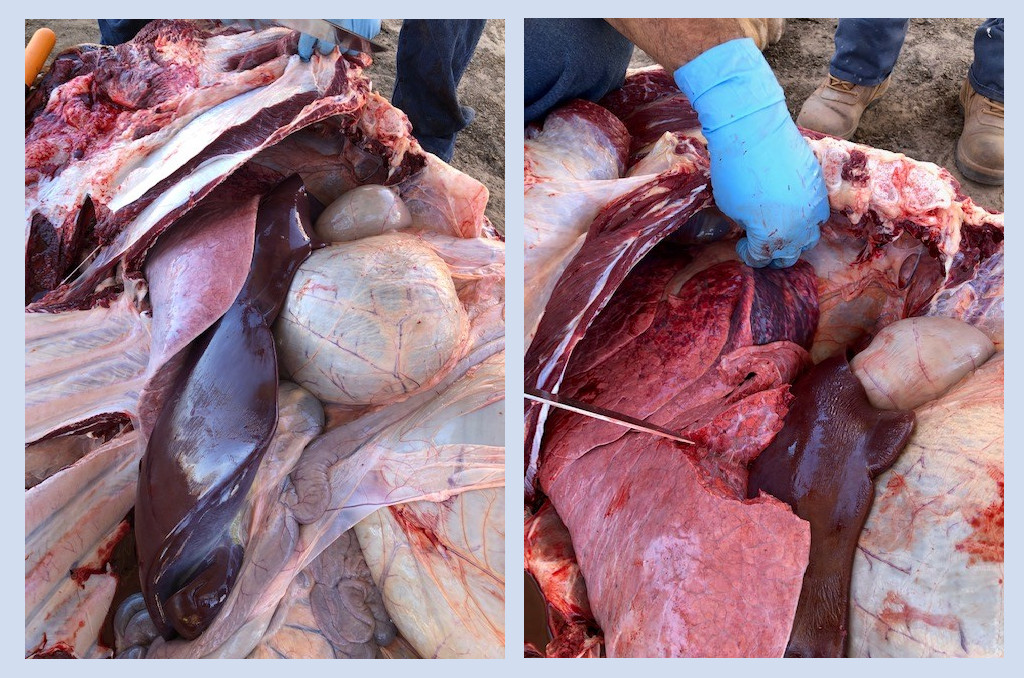 Above: No significant finding on post mortem – all major organs appeared normal.