22 Brahman cows from a mob of 40 die after moving to a new property. 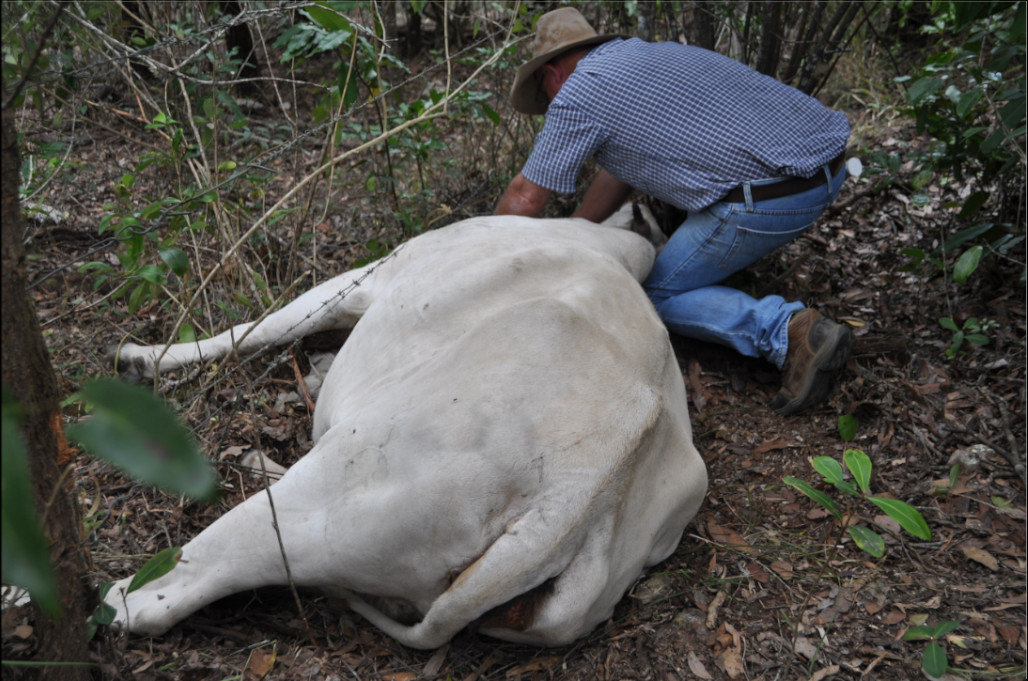 Above: One of the Brahman cows found dead in the paddock.

Case definition: Recently introduced mature Brahman cows are found dead or die after a short period of ataxia and recumbency. An abnormal respiratory pattern seen on clinical examination with a slow respiratory rate (12-15 breaths per minute) and a considerable expiratory effort.

Disease mapping: The cows were moved from a property in the dry country in central Queensland to a subtropical area near the coast. They were put in a forest paddock with long grass and shrubs that had not been grazed for many months. One week later the manager discovered several dead. The local stock inspector did a post mortem of one cow and found no significant gross pathology but they did observe a significant burden of paralysis tick, Ixodes holocyclus. Two days later several more cows were discovered dead.

Gross findings: The vet was called to examine an ataxic cow. She had numerous, immature and engorged paralysis ticks and an abnormal respiratory pattern. No significant changes were found on post mortem.

Laboratory findings: No significant haematological, biochemical or pathological changes were found in the submitted samples. Fixed heart was not sent so exclusion of heart leaf poisoning by histopathology was not possible.

Animal / management / environment risk factors: Naïve cattle introduced to an area and at a time when tick infestation is common are highly susceptible to paralysis tick toxicity.

Recommendations: Remove the surviving 18 cows from the paddock and spray them with Amitraz. Be aware that even a small number of adult paralysis ticks can be fatal for cattle and horses.