Within a week of arriving on a new property, 14 steers died and another 100 were lethargic.

Case definition: Weaner steers that are lethargic, lying down for long periods, off their feed and may be coughing and have a serous nasal discharge.

Disease mapping: The animals had been mustered, weaned in yards and branded from mid-to late-October, and then 400 of 1200 were trucked approximately 200 km and put under centre pivots. Weaners remaining at the source station were also reported to have serous nasal discharge, coughing and were lethargic but no mortalities were observed at that time.

Gross findings: A recumbent, lethargic 10-month-old steer with a cough was euthanised and severe consolidation and congestion of the ventral lung lobes was observed with adhesions extending from the lung lobes to the diaphragm. Severe consolidation of multiple lung lobes was also found at the post mortem of two lethargic weaners with respiratory impairment from the source station. One also had necrotic change of the ileum. Fresh and fixed samples were submitted of lung, heart, kidney, intestines, brain and brain stem, along with two swabs of lung in Amies medium.

Laboratory findings: Histopathology and bacteriology confirmed bacterial bronchopneumonia with isolation of Pasteurella multocida and Mannheimia haemolytica. Multiplex PCR did not detect any of the common respiratory viral pathogens (IBR, BRSV, PI3, coronavirus, pestivirus). The severe enterocolitis of one portion of intestine was consistent with salmonellosis.

Recommendations: Immediate treatment: All cattle showing any sign of respiratory distress to be immediately treated, the recommended medication being Draxxin KP because of its efficacy for the pathogens involved, its prolonged action (reducing the need to run ill cattle through the yard multiple times) and its anti-inflammatory action. This regimen stopped the outbreak on the destination station, with only another 6 animals dying, and stopped the deteriorating situation at the source station.

For prevention: Because Mannheimia haemolytica was isolated, freshly weaned cattle entering the feed pens should be vaccinated with a suitable respiratory disease vaccine. Reducing stress during animal husbandry events is also a key step to preventing future outbreaks. Painful procedures such as dehorning and branding would be better done once the cattle have settled post-weaning, and pain relief during these processes would also be an ideal input to improve animal welfare. 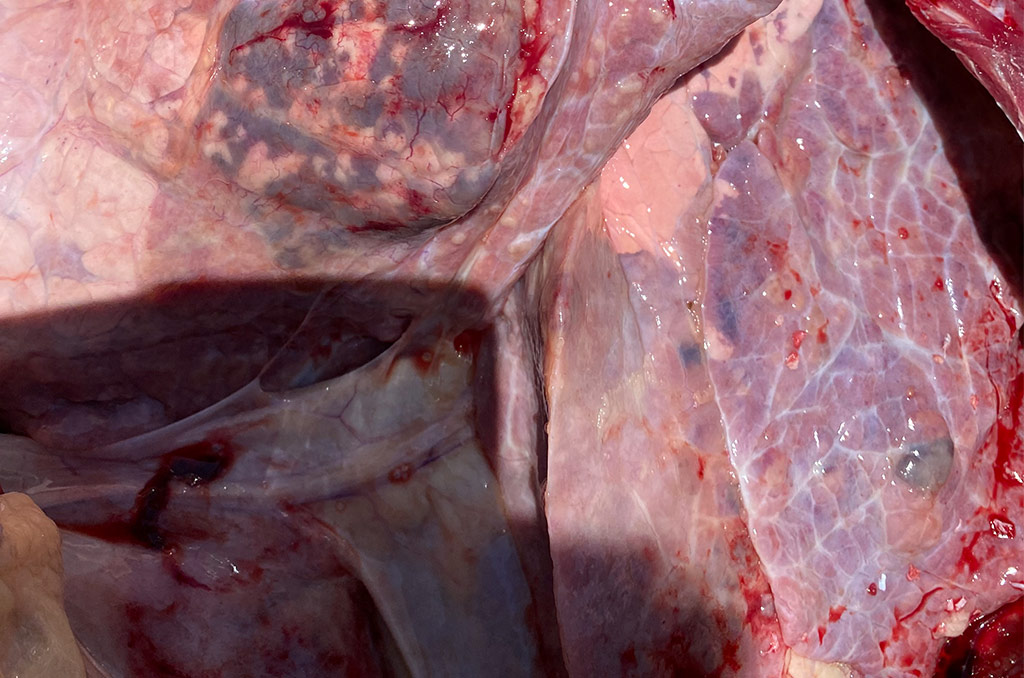 Above: Severe consolidation and congestion of the ventral lung lobes was observed with adhesions to the diaphragm​.