High mortality in a mob of 450 steers over three days, with 5 dead and 2 sick. 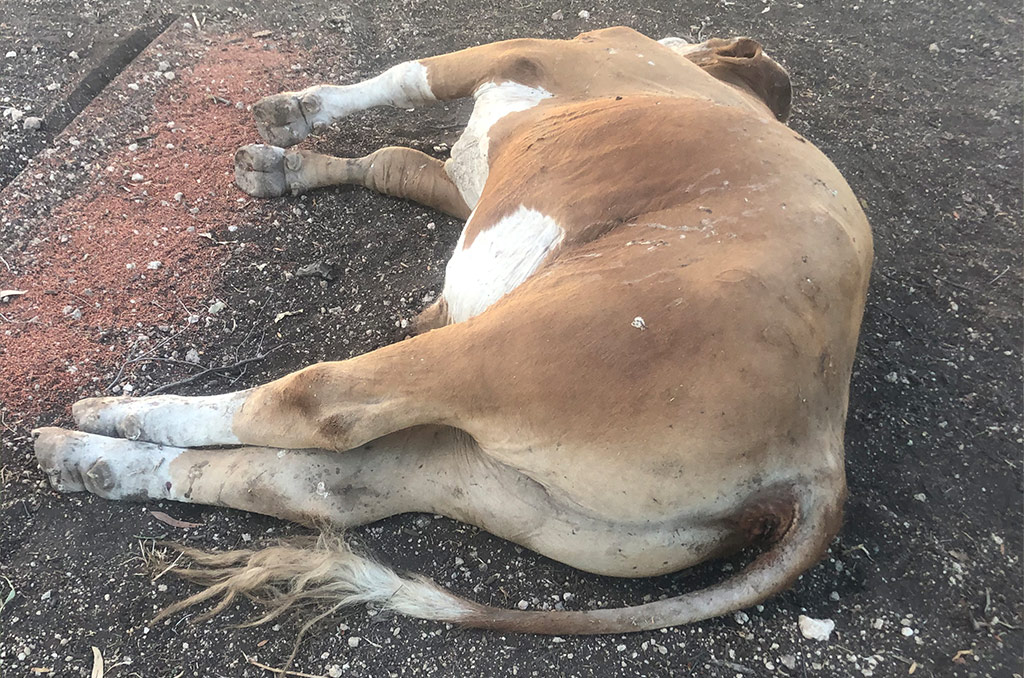 Above: The fifth steer to die within three days​.

Case definition: Brahman-cross weaner steers (18 months to 3 years of age) from a single mob that are found dead or easily exhausted when walked to the yards.

Disease mapping: The mob of 450 steers animals had been continuously grazing a paddock of open black soil creek flats for the previous 3 months. The owner noticed the first animal dead on a water run (Day 1). Another was found on Day 2, two observed to be lethargic on Day 3, and another 3 found dead on Day 4. The steers had been vaccinated with 5-in-1 at branding and weaning, and a single botulism shot (3 yearly) at weaning. They had a Body Condition Score of 2-3 (out of 5).

Gross findings: The vet conducted a post mortem examination of one of the steers that died on Day 4 within four hours of its death. The carcase was very pale in colour. The liver was enlarged with rounded edges. The spleen was enlarged and friable when cut. There was port-wine coloured urine in the bladder. All other organs appeared normal. Aqueous humour, urine and a full set of tissue samples were sent to the laboratory. The presumptive diagnosis was tick fever (babesiosis or anaplasmosis), with anthrax considered but deemed unlikely (location outside the anthrax belt), and a plant toxicity as a possibility.

Clinical examination of a lethargic steer the following day (Day 5) found pale mucous membranes and a temperature of 41.0 degrees Celsius. Bloods and a blood smear were submitted to the laboratory.

Animal / management / environment risk factors: Local knowledge supported the likely diagnosis – with the practice principal seeing tick fever near the same water square in the neighbouring paddock in the 1980s.

Recommendations: Following the post mortem the owner was advised to dip the animals and then move them to a different paddock. They were also advised to have any further sick animals examined and treated as these may be saved with Imidocarb treatment. No further animals died.

The vet recommended that Tick Fever vaccine be included in vaccination protocols from now on to all weaners. Ideally wean animals and vaccinate with tick fever vaccine as the last thing before releasing from the yard into weaner paddock. It was also recommended that an ‘Animal Health Declaration’ be obtained for any new livestock purchases so any unvaccinated animals could be vaccinated.