Thirteen cows died or became recumbent within two weeks of being drafted and put onto supplementary feed.

Case definition: Ataxia, recumbency and death of mature cows in light condition within a couple of days, from a mob supplementary fed in a holding paddock and then a feedlot.

Disease mapping: A mob of 220 cows in light condition were drafted off and given supplementary feed to improve body condition prior to shipment interstate. They had ad lib access to hay and pasture in a holding paddock for a week. They were moved to a feedlot with ad lib access to good quality oaten hay, Rhodes grass hay and pellets in self feeders. They were seen eating hay but not pellets. Two days after entry to feedlot 5 cows were showing signs of weakness and ataxia. The next day most of these were found dead and a couple more were unable to rise. Five days later another 6 cows died.

Gross findings: A post mortem of one of the recumbent cows. The cow autopsied had diarrhoea that was most likely due to change of diet. All four stomachs were full of oaten and Rhodes grass hay ruling out inanition as a possible cause. No other abnormalities found (although a comment was made to the manager that the right side of the heart did look thin walled and flabby compared to normal). Botulism was at the top of the list at this stage of the investigation with some form of poisoning or metabolic imbalance also being considered. Blood samples were collected from 20 cows to assess the botulism status of the mob.

Laboratory findings: A diagnosis of bovine hypertension syndrome was made on histopathology with moderate multi-organ (pulmonary, renal, myocardial) hypertensive vasculopathy. All cows were ELISA test positive for Botulinum type C and D suggesting that they had been successfully vaccinated for botulism.

Samples of oaten hay and Rhodes grass hay eaten by the affected mob and from a different ‘control’ batch were submitted for analysis following the histopathology findings. Evidence of potentially toxic plants was not observed in the samples, and all produced positive cultures of known mycotoxin-producing fungi. Results are pending for mycotoxin analysis, simplexin screening (the toxic principle of Pimelia species) and ionophore analysis of the feed pellets.

Recommendations: The cause of the bovine hypertension syndrome was not established. It is probably related to a hay contaminant (such as Pimelia species) or mycotoxin. Mortalities ceased when animals were removed from the hay. 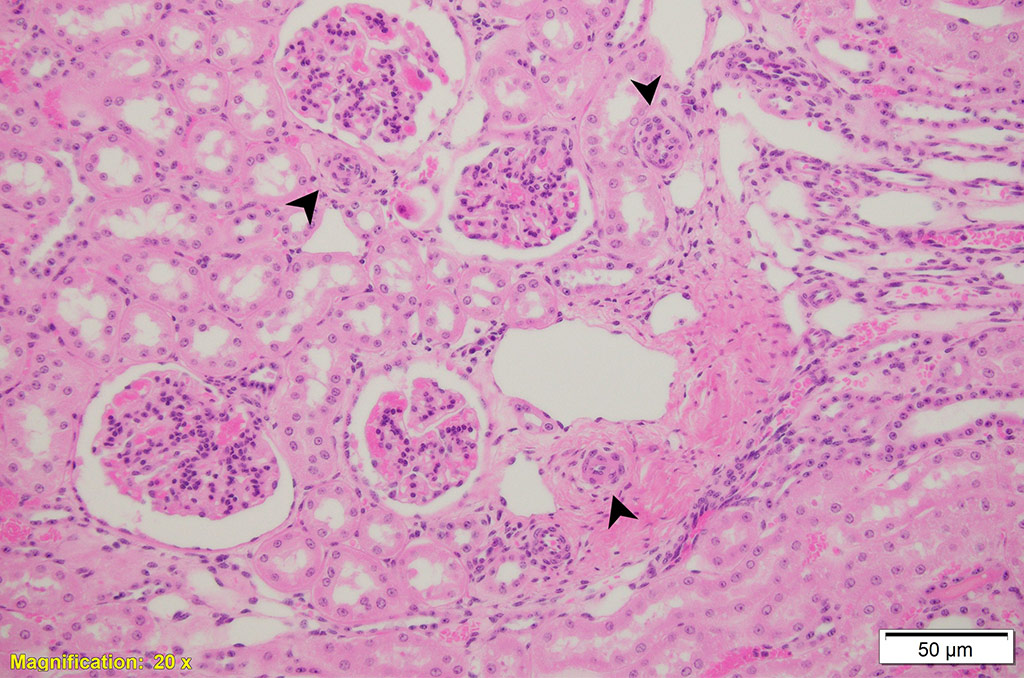 Above: Hypertensive vasculopathy in renal tissue – also observed in lung and heart tissues​.