Fifteen bulls with respiratory and nervous signs, three dying within a few days of the onset of clinical signs. 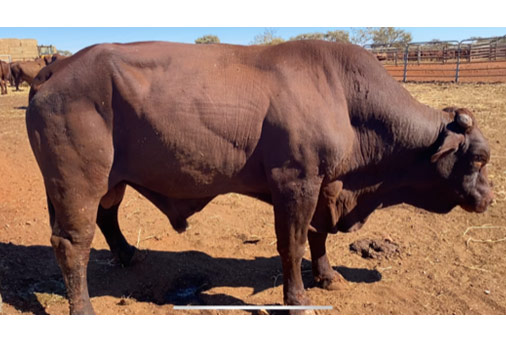 Above: A severely affected bull – has a wide-based stance and is unwilling to move.

Case definition: Clinical signs that can be mild to severe. Very sick animals are lethargic, may stand in a wide-based posture, have a high respiratory rate, nasal discharge, tremors and twitching.

Disease mapping: The bulls had been progressively yarded over a month, with the mob comprising aged herd Droughtmasters and younger wild cleanskins from the Pilbara. The older bulls had come into the yards earlier than the cleanskins and more were affected. The manager called after three died, 4 days after the onset of clinical signs. None of the weaners and spayed cows brought into adjacent pens in the previous 2 days were affected. There was no sign of poisonous plants in the yards. All animals in all of the pens were fed a diet exclusively of grass hay from Perth.

Gross findings: Post mortems were performed on two bulls: one recently dead animal and a severely affected animal that was euthanised by captive bolt. Both animals had enlarged hearts and pulmonary lesions. Lung pathology was extensive in one bull (consolidation, fibrinous adhesions and firm irregular shaped caseous lumps) and seen as bluish patches of consolidation of cranioventral and middle lobes in the other. A full set of samples were submitted to the lab including bloods, tissues (lung, heart, liver, kidney, spleen, lymph nodes, GIT, spinal cord, skeletal muscle), rumen contents, brain from one bull, and a hay sample.

Laboratory findings: Histopathology of the brain provided the definitive diagnosis for this case – with acute multifocal high protein fluid vascular leakage in the cerebellum being typical of ARGT. Tests were negative for common respiratory pathogens (including BRSV, Bovine Coronavirus, BHV-1, Bovine Parainfluenza virus and pestivirus). Rumen contents were ELISA positive for ARGT and the hay sample was negative (note however a bigger sample was needed).

Animal / management / environment risk factors: Corynetoxins are very stable and will survive the transport and storage of contaminated hay.

Recommendations: Immediately following the post mortem, the manager was advised to put distance between the bulls and cows/weaners (in case there was an infectious agent involved) and to change the hay. Mortalities continued with seven more Droughtmaster bulls dying. Recommendations to the property owner once the ARGT results were known were: not to use any more hay from that batch; to let all animals out of the pens to graze on pasture; and to test hay containing rye grass in the future. Only two more bulls died 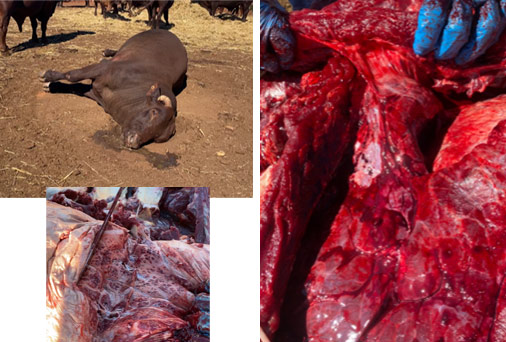 Above: Both bulls had extensive pulmonary pathology – consolidation, adhesions and irregular caseous lumps.