About 50 animals developing nodular to flat skin lesions within 3 weeks. 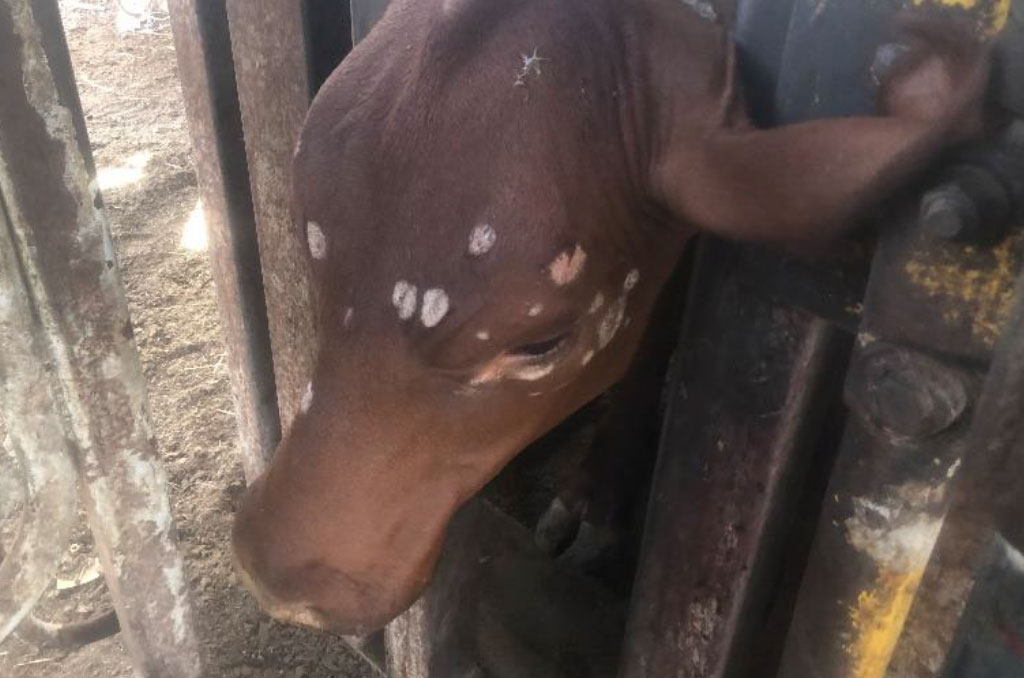 Above: Skin lesions on one of the less affected weaners in the mob.

Case definition: Heifers and steers in a weaner mob with varying degrees of skin lesions, from a few millimetres to 75mm in diameter, from flat to raised nodules to pedunculated. Severe cases typically have lesions around the eyes and extending back over the shoulders, and some between legs and around the scrotal area on steers. Milder cases typically have a few isolated lesions on the neck and head.

Disease mapping: The mob was made up of heifers and steers approximately 240kg average weight with 5-6 poor-doers. Affected and non-affected animals were similar body condition and weights. The mob were in a small paddock on hay and pasture, and being fed grain through a feeder. Half the animals had been there for 3 months; the others were added in two groups 1-2 months prior to the investigation. All were healthy at the time of introduction. The weaners had been treated with Dectomax pour-on 2 weeks before the first affected cases were seen. A significant rain event of 60 mm occurred 10 days before first signs.

Gross findings: About 50 weaners from the mob of 250 were affected, 15 of these having severe lesions. Skin biopsies were taken from the 5 worst affected animals – fresh tissue for Lumpy Skin Disease exclusion. Five poor-doing animals had ear notch tests for BVD antigen, and blood samples were taken from 5 randomly selected animals for BVD antibody.

The differential diagnoses were Bovine Papilloma Virus (although it would be rare to have 20% of a herd affected at the same time), Lumpy Skin Disease, ringworm and rain scald.

Animal / management / environment risk factors: Possible lowering of general herd immunity from co-mingling of animals from different origins and the weather being cold and wet.

Recommendations: The owner was advised to continue to keep the animals separate and keep watch on the non-affected animals while waiting for results. If herd immunity was lower, the implications could extend beyond Bovine Papilloma Virus to other diseases such as Bovine Respiratory Disease and coccidiosis. Papillomas usually fall off with time, but irritation of the lesions can sometimes speed up the process (iodine solution and rubbing with a stiff brush, wearing gloves).